Ladder Golf
Build Your Own

As the game is becoming more popular, the price is going up.  Toward the end of the summer season, the price may come down to a reasonable amount - even near the same as what you can make it for.  However, if you don't want to wait for that time, it's not hard to make either.

These are not the "official" directions or sizes.   I measured the game from someone else who had it at a campsite we visited.

The "ladder" rungs are cut 24" long plus the 90º bends which makes the ladder about 25 1/2" wide.  The vertical pieces are cut 12 inches long between the top to middle, middle to bottom rungs.  The fittings will add about 3/4" at each fitting making it about 13 1/2" between rungs.
From the bottom rung to the ground it's 20 inches.
The base foot pieces are 12 inches long out of a tee in the bottom.
I made it so I could remove the base for storage.  I figured it would be better with it screwed in than trying to just slide the feet into the tee each time.

The bolas (the ball things) are made with normal golf balls with a hole drilled through them to accommodate the rope.  I used 1/4" nylon rope.  If you use 1/8" rope, it will tangle very easily.  You will wish you had used a bigger rope.  The bolas are 18 inches from the end of one  ball to the end of the other ball. I drilled out each ball slightly larger than the rope and then countersunk one end of the hole. Put the rope through the hole (you may have to melt it slightly, but not too much to get it through) and leave an inch sticking out the countersunk end.  Light the piece sticking out of the ball on fire and let it melt until it becomes flush with the ball.  Set it down and let it cool. I practiced on a used golf ball before I tried it with the new ones.

One way to keep score is to drill holes along the back of the vertical section at an angle - from the back to the front.  Then write the numbers 1 through 21 under the appropriate holes - on the front and the back.  If you do this on both uprights of both ladders, you will be able to keep score for up to 4 teams.  We found  colored golf tees to put in the score holes worked very well.  Sometimes the bola's get hung up on the golf tees or the tees get broken so have several of them handy.  It may also reduce the strength of the uprights by drilling holes in them.

Another way to keep score is to make a separate score keeping device.  The advantage of this is that it is usable for other games, the tees do not get broken and it doesn't reduce the strength of the ladder uprights.   .

Ladder Golf Scoring and Rules:
If you look on the internet, you'll find many different rules for the game.  So it was determined by many people I know who have the game that the rules are determined by the owner of the game.  There are "official" rules on some sites, but since I own my game, these rules are my official rules and are what we go by.  So if something comes up not covered in the rules, ask the owner to resolve the issue.  Their word is final.

We have played with up to 4 teams.  The scoring gets a little confusing, but it's fun.
A team consists of 1 or 2 people.  If there is only 1 person per team, then the teams have to move from ladder to ladder after each round - assuming that there are 2 ladders.  If there are 2 people on each team, then 1 of each team will be at one ladder and the other team member will be at the other ladder.

The idea of the game is for one team to reach the score of exactly 21 before the other team(s) does.

Something to keep in mind:
We have heard that some of the Ladder Golf sets that you buy begin to crack or break where the golf balls hit repeatedly - mainly on the rungs.  We have not had that problem yet, however.  It could be that the tape somewhat cushions the rung when the bola hits it or the fact that we used schedule 40 PVC.  At any rate, if you go too thin, you will probably end up with broken or cracked rungs.

The base consists of a tee with the 2  12 inch pieces out the straight section and a short piece in the upright of the tee just long enough to go into the adapter (PVC to male).  I put caps on the end of each leg to make it look neater.
With the male and female adapters, it is much easier to store and simple to set up.  Just screw the bases on each leg and you're all set.
However
Make sure you don't screw the parts together too tight.  If you do, you may have trouble getting them apart.  This could weaken the joint.  We have heard of at least one set being broken trying to un-screw the joint because it was put together too tightly.

Problems seen:
Bola rope:  I used 1/4" nylon rope.  If the rope is any smaller, it seems to get tangled up much easier

Ladder rungs:  I put colored electrical tape on the rungs to mark them.  However it seems to have another positive quality.  My son-in-law bought a Ladder Golf set for his parents (without tape on them) and at least one of the rungs have cracked (they were also made out of PVC).  With the electrical tape on them, it may dampen the ball hitting it enough to protect it from cracking.  Only time will tell.

"Official Rules" can be found at: http://www.laddergolf.com/ladder-golf-official-rules.php
I'm not sure who made these rules official, but there are other rules on the internet also.  The main thing is that everyone agree on the rules beforehand and then have fun playing the game.
The rules above are different than some but are challenging.

BoloToss is another game that is very similar to Ladder Golf.  It provides you with a different kind of challenge.

One of the many forums on Ladder Golf 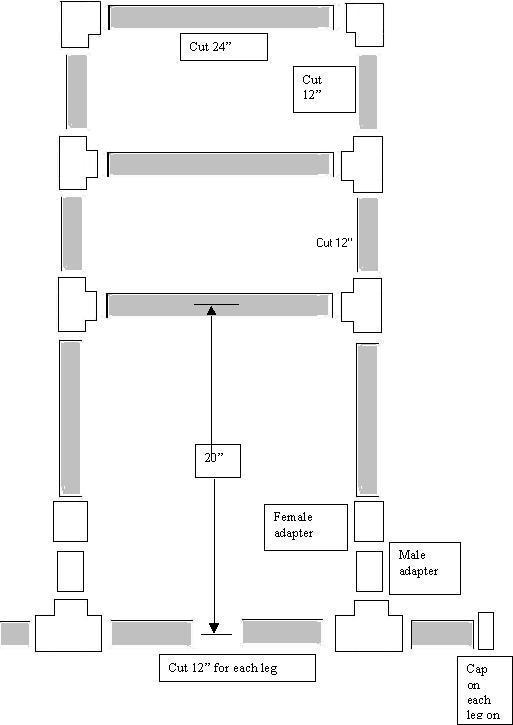 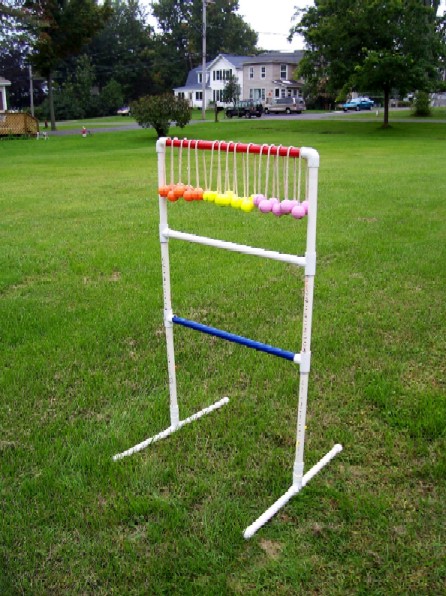 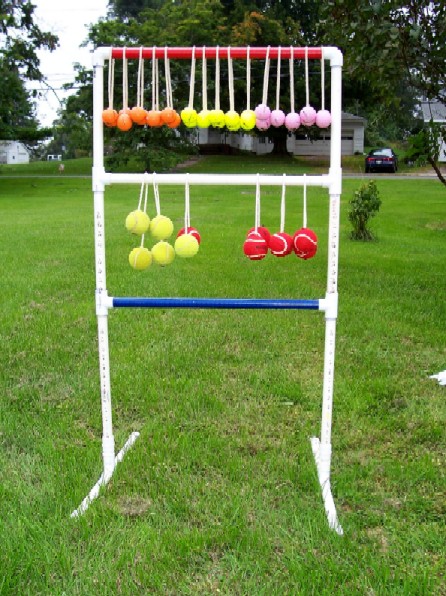 A completed ladder with the bolas on the top rung.  The ladder on the right has tennis balls for the younger children on the middle rung.

Other Names for Ladder Golf 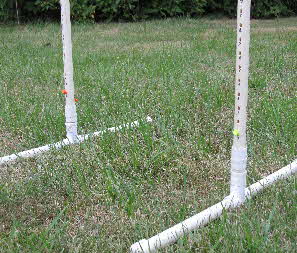 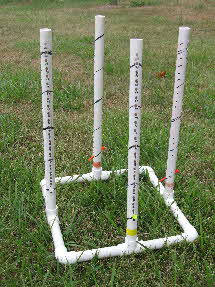 Scoring:
Left - Score for 2 teams are on the ladders.  For the other 2 teams they would be on the other ladder

Right - Score for all 4 teams are on a scoring tower.  It can be placed anywhere that is handy.  Each teams pole can be removed for easy storage.

There are many names that Ladder Golf goes by, but here are a few of them: